Originally released on 2015-03-31
UPDATE 2016-11-02: Version 0.2! Updated, corrected and improved EXE edition, now with HTML5 version for browsers. Also updated the FLAC with correct tags. Why do I bother?


Walking to Sad Pianos While Pressing W is a pretentious waste of time and space. You are some beardman walking around a city. Then it ends. It's got achievements though. Kids like those.

Walking to Sad Pianos was a mistake.

Inspired by such "masterpieces" as Polygon's Game of the Year Gone Home, the actually great Stanley Parable, and the awful, awful, worthless piece of crap created by that non-dev FoldableHuman called Resist, which this game is a parody of, or something. I forgot what I was doing half-way through.

Also inspired by this game:
http://thebestgamers.net/art.html

(Just in case there's any shenanigans: The reviews inside the game from Polygon and Kotaku are obviously fake. I shouldn't even have to say this.)


The great guys at lo-ping.org (i.e. the guys who inspired me to make the game in the first place) made this Polygon-tastic video review that's here on YouTube. So go watch that instead:

Also, Michael Campbell (@EvilBobDALMYT) wrote for Super Nerd Land a review of the game, which is here.


WHY IS THERE A TEN MINUTE REVIEW OF THE GAME — WHAT IS WRONG WITH YOU PEOPLE? I mean, The Button Buddies guys at Digitato played my game recently apparently maybe, so there you go. (Warning: It spoils the entire "game". Did I say "warning"? I meant "pro-tip".)


I feel as if I had vomited over a carpet, and people had stood around to contemplate the stain.

Includes a FLAC version of "Theme from Sad Piano" by M Janet Mars. 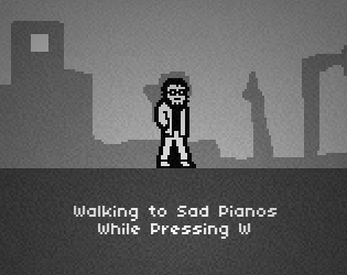